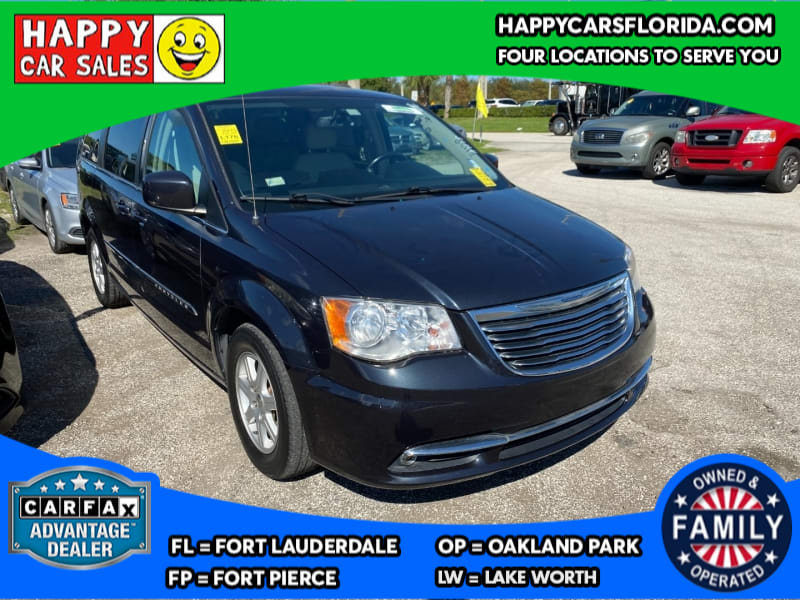 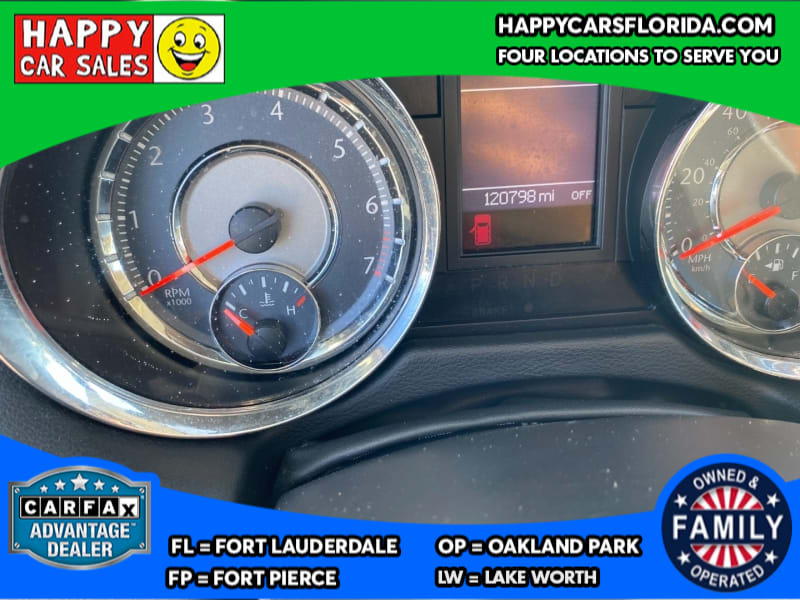 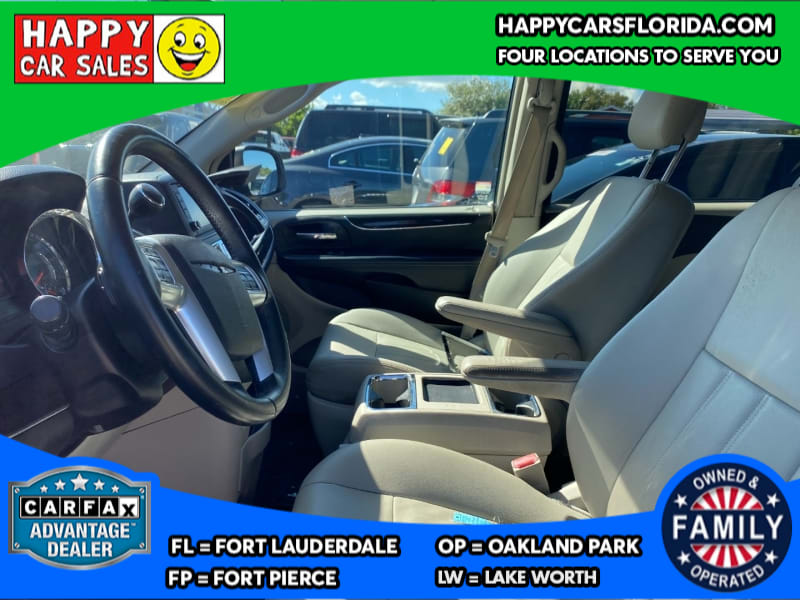 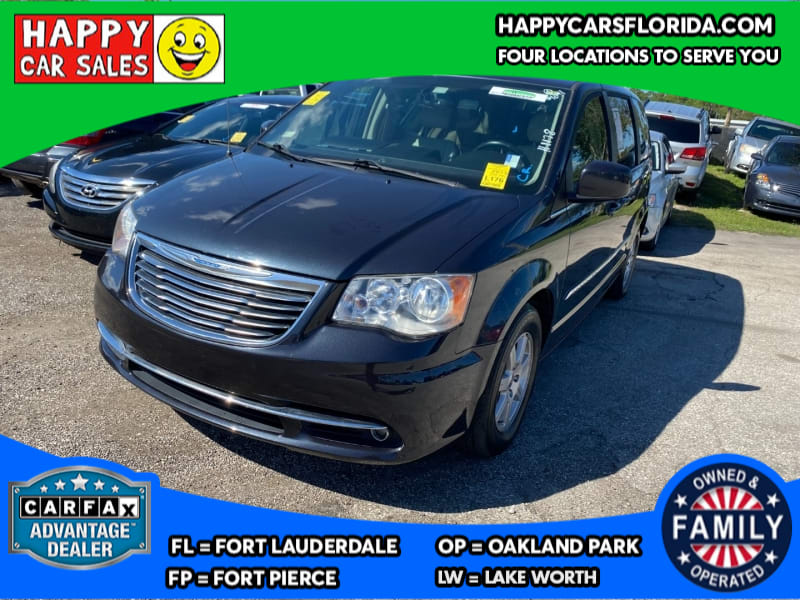 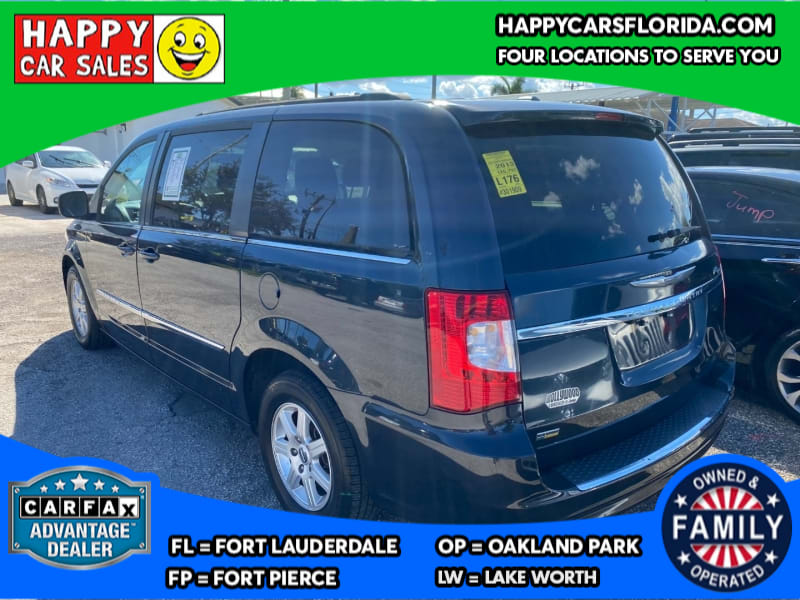 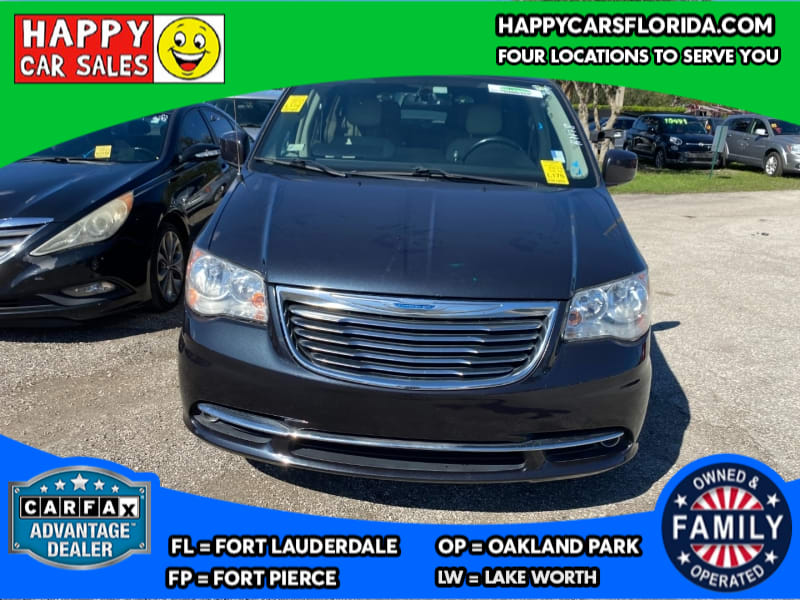 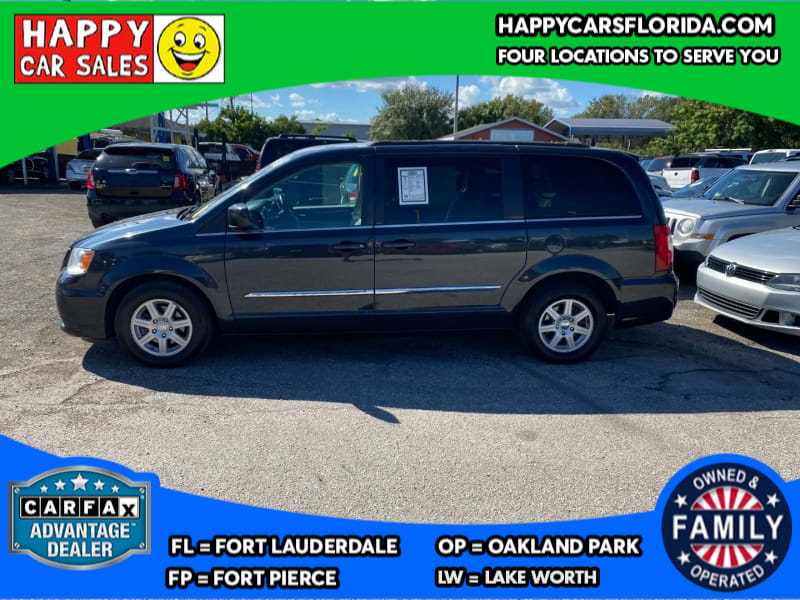 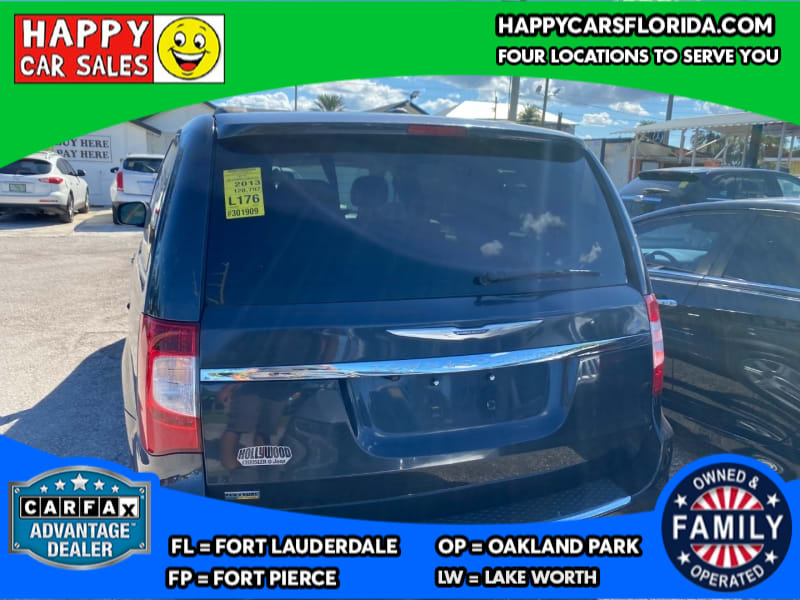 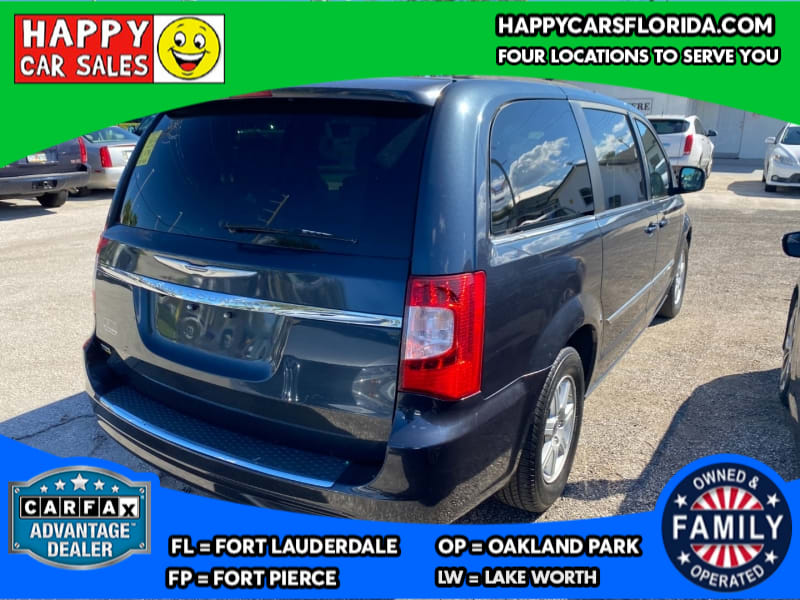 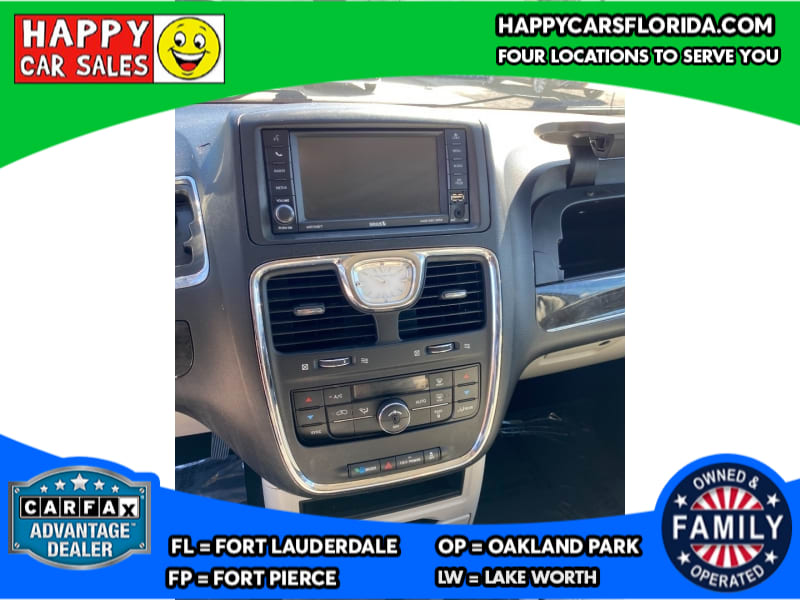 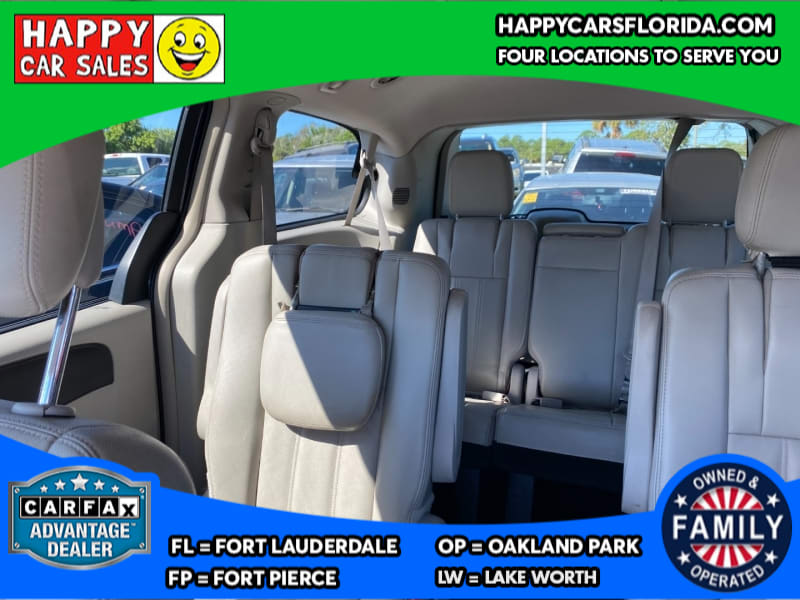 The Chrysler Town & Country's history dates back 1989, when it broke new ground as the first luxury minivan ever produced. Since then, competitors such as the Toyota Sienna, Honda Odyssey and the Nissan Quest have entered the market with varying degrees of success, but the 2013 Chrysler Town & Country continues its long-standing position as one of the top-selling people movers in America â and for good reason. Its interior quarters are stuffed with practical and convenient niceties, including Chrysler's popular Stow 'n Go second-row seating and a newly-available Blu-Ray disc player. Add in class-leading horsepower, and the 2013 Town & Country becomes a minivan you actually want to drive â with or without the family.Used 2013 Chrysler Town & Country PricingThe Manufacturer's Suggested Retail Price (MSRP) for a 2013 Chrysler Town & Country runs from just under $31,000 in base form to roughly $43,000 for a fully-loaded Limited trim. When compared to the $21,000 Dodge Grand Caravan or the $26,000 Toyota Sienna, the entry-level Town & Country Touring model seems fairly overpriced, but it comes with considerably more standard equipment. To see what consumers in your area are actually paying for their 2013 Town & Country minivans, be sure to check KBB.com's Fair Purchase Price at the bottom of this page. On the resale side, we expect the Town & Country to perform slightly better than in years past, but to still lag behind the values currently held by the Honda Odyssey, Toyota Sienna and the Nissan Quest.Driving The Used 2013 Chrysler Town & CountryIf you haven't driven a Town & Country since its transformation in 2011, it's worth some time behind the wheel. The revamped suspension provides excellent road manners, with precise steering, minimal body roll and a velvety ride. Chrysler's new 3.6-liter Pentastar V6 has power in reserve and can move a fully-loaded Limited model without making you wish for a HEMI V8. The engine and transmission work fairly seamlessly, never feeling overburdened or indecisive, and the dash-mounted gear selector is easy to master. Noise levels inside the Town & Country are quiet enough to make conversation easy among all three rows. Faults are hard to find in the 2013 Town & Country, but it's something of a reach to use its touch-screen audio system, and a somewhat-wide turning radius makes it feel less nimble in parking lots, especially when compared to the exceptionally tight-turning Honda Odyssey and Toyota Sienna.Interior ComfortChrysler minivans have long been a showcase of innovation, and now the Town & Country offers the refined appearance to match. Soft-touch trim and chrome-trimmed instruments' elegant LED lighting complement standard leather on the first two rows of seats as well as the manually tilt/telescoping steering wheel. Standard power front seats are supportive yet supple, and Chrysler's Stow 'n Go second-row bench remains the industry benchmark, with easy folding and under-floor storage when the seats are in use. The third row can be flipped 90 degrees for tailgate-party seating. It's easy to lose count of the many bins, cubbies and power ports, though a 115-volt household-style outlet is a standout.Exterior StylingSparkling chrome with sparks of innovation continue to make the Town & Country shine. Its 2011 makeover added the new wave-form chrome grille and jeweled headlights, and 17-inch alloy wheels are standard across the board. All six side windows, the liftgate and both sliding doors are power-operated, with the slider rails concealed between the rear side windows and chrome trim, a styling lesson Honda should learn. The standard roof rack features clever Stow 'n Place crossbars that fold into the side rails when not in use.Favorite FeaturesAUDIO/VIDEO OPTIONSIn addition to the comprehensive Uconnect infotainment system up front, Chrysler's flagship minivan offers dual, independent rear video screens that allow second- and third-row passengers to watch two different DVD or Blu-Ray movies, play different video games or even watch the Disney Channel, Nickelodeon or Cartoon Network Mobile via SiriusXM Backseat TV.HEATED STEERING WHEELA feature offered on no other minivan, this small convenience is greatly appreciated on mornings when the thermometer dips into single digits.Standard FeaturesAvailable in Touring, Touring L or Limited trims, the 2013 Chrysler Town & Country offers the longest list of standard features in its class. Highlights include 8-way power front seats, Stow 'n Go second-row seats, power-sliding side doors, a rear-seat DVD entertainment system, leather seating and a 6-speaker audio system with a 6.5-inch touch-screen display. The range-topping Limited model elevates the speaker count to nine and adds navigation, SiriusXM Travel Link (real-time weather, sports, stocks, movie listings and fuel prices) and Nappa leather seating materials with suede inserts for first- and second-row seats. With safety weighing heavily on the minds of every parent, Chrysler gave the 2013 Town & Country a full suite of airbags, a standard backup camera with on-screen guides and an available blind-spot monitor with a cross-path alert function to notify the driver of approaching traffic when backing out of a parking space.Factory OptionsBoth the Touring and Touring L trims offer a Driver's Convenience package that includes a heated steering wheel, heated front seats, keyless access with push-button start and advanced voice recognition for controlling various multimedia and hands-free features. The SafetyTec package includes rain-sensing windshield wipers, blind-spot monitoring, rear sonar proximity sensors to help mitigate vehicle damage during tricky parking maneuvers and smart-beam headlights that automatically switch between the high and low beams depending upon traffic conditions. We were surprised to find a power moonroof on the Limited's list of options, seeing as the near-$41,000 price tag includes more creature comforts than some luxury cars.Engine & TransmissionA 3.6-liter Pentastar V6 paired with a 6-speed automatic transmission is the sole drivetrain offered on the 2013 Chrysler Town & Country. The Pentastar is easily Chrysler's most enjoyable V6 to date and leads the class in terms of horsepower. In addition, the Pentastar is Flex Fuel-compatible, meaning it can run on a combination of gasoline and E85 ethanol.3.6-liter V6283 horsepower 6,400 rpm260 lb-ft of torque 4,400 rpmEPA city/highway fuel economy: 17/25 mpg (gasoline), 12/18 mpg (E85)

Vehicle overviewLarge crossover SUVs have become the vehicle of choice for many large families. And ...